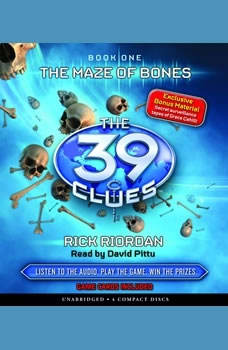 The 39 Clues Book One: The Maze of Bones

What would happen if you discovered that your family was one of the most powerful in human history? What if you were told that the source of the family's power was hidden around the world, in the form of 39 Clues? What if you were given a choice take a million dollars and walk awayor get the first Clue? If you're Amy and Dan Cahill, you take the Clue and begin a very dangerous race.

Richard Russell "Rick" Riordan, is a #1 New York Times bestselling author and former teacher of English and History. His career started with teaching in various schools in Texas, after earning h I s double major from the University of Texas at Austin. His favorite subject that he taught in almost every class was Mythology, since he enjoyed it and most students really enjoyed it. That interest gave way to his very popular series, Percy Jackson and the Olympians, and The Kane Chronicles, a trilogy focusing on Egyptian mythology. In 2014 came The Heroes of Olympus, which was the sequel to the Percy Jackson series about Roman and Greek mythology.

Twentieth Century Fox purchased the rights to the Percy Jackson and the Olympians series and released a full feature film in February of 2010. Riordan has written many successful book series for children and adults. His newest series, Magnus Chase and the God's of Asgard begins in October of 2015, with the release of the first book, The Sword of Summer, focusing on Norse mythology.

Riordan lives in Boston with his wife and their two sons, who inspired the Percy Jackson series through its beginnings as a bedtime story.