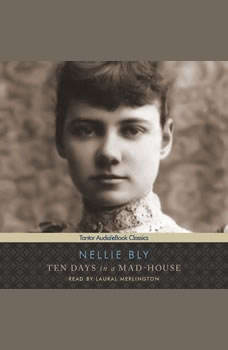 Ten Days in a Mad-House

In 1887, Nellie Bly had herself committed to the notorious Blackwell's Island insane asylum in New York City with the goal of discovering what life was like for its patients. While there, she experienced firsthand the shocking abuse and neglect of its inmates, from inedible food to horrifyingly unsanitary conditions. Ten Days in a Mad-House is Bly's exposé of the asylum. Written for Joseph Pulitzer's New York World, Bly's account chronicles her ten days at Blackwell's Island and, upon its publication, drew public attention to the abuse of the institutionalized and led to a grand jury investigation of the facility. Ten Days in a Mad-House established Bly as a pioneering female journalist and remains a classic of investigative reporting. This edition also includes two of Bly's shorter articles: "Trying to Be a Servant" and "Nellie Bly as a White Slave."

WARNING: NO ALCOHOL AND DRUG ARE PERMITTED IN YOUR LIFE BEYOND THIS POINTDid you read the sign? Yes, you’ve read that correctly...from this point forward and onward...your alcohol and drug (as well as other addictions you may have) should be l...

Mood: Learn How To Control Your Moods by Changing the Way You Think
by Linda M. Martin

Do you suffer from mood swings that have a damaging effect?Do you find it difficult to manage them?Do you need sound advice and the right instruction to alter the way you think and act?We can all suffer from bad moods occasionally. A problem at work...

How to Battle Depression and Suicidal Thoughts
by Ray Comfort

Depression and suicide aren’t just a worldwide epidemic, they also hit home. With over 350 million people suffering from depression and an estimated 1 million Americans attempting suicide each year, most of us have been affected by this terrib...

Anxiety Workbook: The Proven System for Managing, Coping and Overcoming Anxiety for Both Women & Men; Cure Your Phobia and Reach Mindfulness Mastery
by Lisa Fletcher

Learn how to manage, cope and overcome anxiety, cure phobia and reach mindfulness mastery! Today only, get this audio bestseller for a special price. We all have our moments when we are scared or afraid of the unknown. It is natural (survival) in...

Anxiety And Depression: How to Overcome Intrusive Thoughts With Simple Practices
by Lisa Fletcher

Do You Just Have The Blues… Or Something More? Feeling down is entirely reasonable in the present quick paced society. Individuals are more stressed than any time in recent memory, but the first step is understanding what you are going throug...

Overcome Your Fear Overcome Flying
by My Ebook Publishing House

Discover How to Overcome Your Fear of Flying! You can demolish your fear of flying, and when those fears are gone they are gone for good! Some self-help books are hard work, but this one isn’t. It’s quick and concise, showing you what t...

Schizophrenia is one of the most traumatic psychiatric disorders, both for the affected person and their family. It also carries an unfortunate stigma and suffers from frequent misinterpretation by the popular media. The disorder usually manifests i...