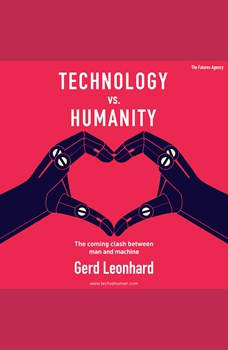 Technology vs Humanity: The Coming Clash Between Man and Machine

Before it’s too late, we must stop and ask the big questions: How do we embrace technology without becoming it? When it happens—gradually, then suddenly—the machine era will create the greatest watershed in human life on Earth.

Technology vs. Humanity is one of the last moral maps we’ll get as humanity enters the Jurassic Park of Big Tech. Artificial intelligence. Cognitive computing. The Singularity. Digital obesity. Printed food. The Internet of Things. The death of privacy. The end of work-as-we-know-it, and radical longevity: The imminent clash between technology and humanity is already rushing towards us. What moral values are you prepared to stand up for—before being human alters its meaning forever? Gerd Leonhard is a new kind of futurist schooled in the humanities as much as in technology.

In his most provocative book to date, he explores the exponential changes swamping our societies, providing rich insights and deep wisdom for business leaders, professionals and anyone with decisions to make in this new era. If you take being human for granted, press Reset now with this passionately argued call to create a genuinely braver new world.

On the Evolution of Intimacy
by Charles M. Johnston MD

In no aspects of life today do we confront more rapid and easily confusing change than in the worlds of gender and intimacy. Men and women equally are left without clear guideposts for their choices. In this short book, one of our time’s most ...

Peter Frase argues that increasing automation and a growing scarcity of resources, thanks to climate change, will bring it all tumbling down. In Four Futures, Frase imagines how this post-capitalist world might look, deploying the tools of both soci...