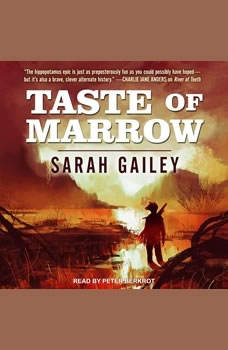 A few months ago, Winslow Houndstooth put together the damnedest crew of outlaws, assassins, cons, and saboteurs on either side of the Harriet for a history-changing caper. Together they conspired to blow the dam that choked the Mississippi and funnel the hordes of feral hippos contained within downriver, to finally give America back its greatest waterway. Songs are sung of their exploits, many with a haunting refrain: "And not a soul escaped alive." In the aftermath of the Harriet catastrophe, that crew has scattered to the winds. Some hunt the missing lovers they refuse to believe have died. Others band together to protect a precious infant and a peaceful future. All of them struggle with who they've become after a long life of theft, murder, deception, and general disinterest in the strictures of the law.

If The South Had Won The Civil War
by MacKinlay Kantor

Just a touch here and a tweak there . . . MacKinlay Kantor, Pulitzer Prize-winning author, master storyteller, shows us how the South could have won the Civil War, how two small shifts in history (as we know it) in the summer of 1863 could have tu...

Joan of Arc was a15th century French heroine. She was born a peasant girl in eastern France who grew up to lead the French army to several important victories during the Hundred Years' War. She was captured by the Burgundians, sold to the English, t...