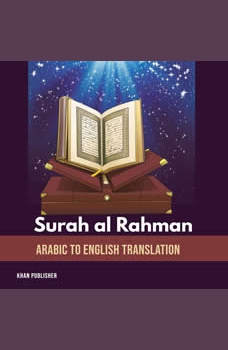 The Surah is named after one of the most beautiful and unique names of Allah, Ar-Rahman, the Merciful. The Surah tells about the countless favors Allah has given to His man. It is one of the most mellow and soul awakening surahs of the Holy Quran. Surah Rahman when recited with pure intention, sincerity and urge to understand the meaning of it, it brings you closer to Allah.It helps increase gratitude and thankfulness towards Allah for his countless blessing.

There is a huge reward for the recitation of Ar-Rahman. It is very beneficial to recite Ar-Rahman on a daily basis.Surah Rahman is said to purify one’s heart from evil and hypocrisy. Especially if you recite it after Fajr prayer on Friday, it cleanses your heart from hypocrisy which is one of the greatest evils. Recitation of Ar-Rahman will also serve as a source of comfort and relief on the Day of Resurrection when everyone would be desperate for even the minutest of good deeds.On the Day of Judgment, Ar-Rahman would appear in the form of a very handsome man who would have a beautiful fragrance. The person would identify all those who used to recite Surah Rahman in their lifetime. The person would be allowed to intercede for all those people and Allah the Merciful shall forgive those people. Such is the undeniable glory of Ar-Rahman.This Ar-Rahman protects a person from all sorts of hardships, difficulties, and miseries. When it is recited at night, Allah sends an angel to serve as a guardian of the person for the whole night. When it is recited in the morning, Allah sends for an angel to protect the person all day long till the sunsets.

Surah Rahman is said to have miraculous effects on sick and ailing people. People having children who reach the age of getting married but unfortunately do not find suitable companions; seek blessings of Surah Rahman as its recitation helps in finding a suitable match for marriage.

Generally regarded as the single most authentic collection of Ahadith, Sahih Al-Bukhari covers almost all aspects of life in providing proper guidance from the messenger of Allah. This 9-Volume Bukhari is the work of over 16 years by Imam Bukhari wh...