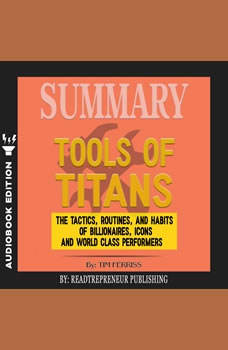 Summary of Tools of Titans: The Tactics, Routines, and Habits of Billionaires, Icons, and World-Class Performers by Timothy Ferriss

Tools of Titans: The Tactics, Routines and Habits of Billionaires, Icons and World-Class Performers by Timothy Ferriss - Book Summary - Readtrepreneur(Disclaimer: This is NOT the original book, but an unofficial summary.)

How did all the successful people get to where they are today? What did they do differently to become who they are today? This book Tools of Titans reveals the habits and trade secrets of the many highly successful people in the world. Through interviews with these people conducted by Timothy Ferriss, they unselfishly share their daily routines that helped them be who they are today.(Note: This summary is wholly written and published by Readtrepreneur. It is not affiliated with the original author in any way)

"Most people fail not because they lack the skills or aptitude to reach their goal but they simply don't believe they can reach it." - Timothy Ferriss

These icons that we respect and look up to did not achieve success in one day. They went through their share of hardships before they could get to where they are today. From this book, not only will we learn how these people dealt with their challenges, but we will also be given valuable insights on how to deal with our own problems and emerge triumphant.

P.S. Tools of Titans is a useful book that will help in all aspects of life - health, wealth and wisdom. Being extremely versatile, you can apply what you need from this book, and skip the parts that you do not need.