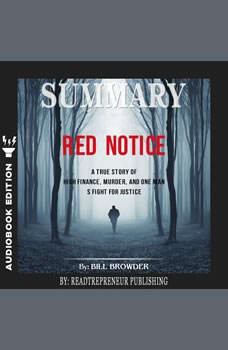 Summary of Red Notice: A True Story of High Finance, Murder, and One Man’s Fight for Justice by Bill Browder

Red Notice: A True Story of High Finance, Murder and One Man's Fight for Justice by Bill Browder | Book Summary | Readtrepreneur(Disclaimer: This is NOT the original book, but an unofficial summary.)

An unpunished brutal murder took place to cover a huge conspiracy, Bill Browder will embark on a quest for justice in honor to his late friend. Sergei Magnitsky was a young lawyer who went in too deep when he discovered a conspiracy to steal $230 million paid to the state by one of the most successful hedge funds. Unfortunately, the Russian authorities involved knew he was going to be a hindrance. Without leaving any trial or room for investigation, Sergei was murdered. The Russian felons thought that was the end of the story but Bill Browder, the hedge fund manager who employed Magnitsky wouldn't let it slide and his drive to do whatever is necessary to uncover the truth will be the starting point of an intense quest for justice. Red Notice is a crude representation of a harsh political reality. With an incredible narrative to give life to this true story, it'll be a miracle if you are able to put the book down before you finish it. What will happen to Bill Browder? Will he be able to fulfill his objective? How will the Russian authorities react?(Note: This summary is wholly written and published by Readtrepreneur. It is not affiliated with the original author in any way)

"The less people know about how sausages and laws are made, the better they sleep at night." – Bill Browder

Uncovering a real story and leaving the dirty deeds out in the open is what makes this book so interesting. An unabridged view on how the political world works. With bribery and corruption lurking around at every corner, how will our protagonist handle the events and seek justice for his lost friend?

Summary of Thomas Jefferson: The Art of Power by Jon Meacham
by Readtrepreneur Publishing

Thomas Jefferson: The Art of Power by Jon Meacham | Book Summary | Readtrepreneur(Disclaimer: This is NOT the original book, but an unofficial summary.)All of the remarkable achievements of Thomas Jefferson converged in one amazing title. Thomas Jef...

Summary of The 10X Rule: The Only Difference Between Success and Failure by Grant Cardone
by Readtrepreneur Publishing

?The 10X Rule: The Only Difference Between Success and Failure by Grant Cardone - Book Summary - Readtrepreneur(Disclaimer: This is NOT the original book, but an unofficial summary.)Have you ever wondered how some people became so Successful? The Wo...

Summary of The Total Money Makeover: A Proven Plan for Financial Fitness by Dave Ramsey
by Readtrepreneur Publishing

The Total Money Makeover: A Proven Plan for Financial Fitness by Dave Ramsey - Book Summary - Readtrepreneur(Disclaimer: This is NOT the original book, but an unofficial summary.)Take on the teachings of money maestro Dave Ramsey so you can take you...

Summary of Braving the Wilderness: The Quest for True Belonging and the Courage to Stand Alone by Brene Brown
by Readtrepreneur Publishing

Braving the Wilderness: The Quest for True Belonging and the Courage to Stand Alone by Brene Brown Book Summary Readtrepreneur(Disclaimer: This is NOT the original book, but an unofficial summary.)In an era where we are continuously feeling disconne...