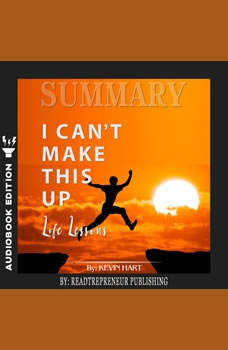 Summary of I Can't Make This Up: Life Lessons by Kevin Hart

I Can't Make This Up: Life Lessons by Kevin Hart Book Summary Readtrepreneur(Disclaimer: This is NOT the original book, but an unofficial summary.)

With all odds against him, Kevin Hart managed to climb his way to the top and lived to tell the tale in his book. I Can't Make This Up gives Kevin Hart's unabridged story and how he managed to overcome every obstacle and become the most successful comedian in the world.(Note: This summary is wholly written and published by Readtrepreneur It is not affiliated with the original author in any way)

"It turns out that the things I hated most as a child are the same things that serve me the most as an adult." - Kevin Hart

Kevin Hart managed to be the man that he is today not only by determination and working hard each day but also due to his unique vision which he'll share in his book to you reach your goals and move forward. Kevin Hart stresses the importance of believing yourself and actively seeking self-improvement.

P.S. I Can't Make This Up will make you climb those mountains that you thought were unreachable. With effort, determination and the right advice, you can be well on your way on the path of success.