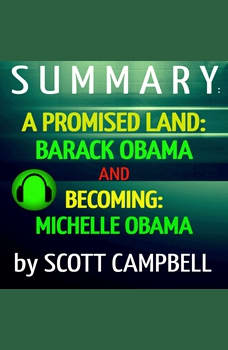 Warning: This is a summary for two books. It is intended to harmonize with, not to replace, Barack Obama’s compelling story, A Promised Land, and Michelle Obama’s epic story, Becoming.

A riveting, deeply personal account of history in the making, A Promised Land relates the story of Obama’s unlikely journey starting as a young boy in Indonesia and Hawaii. His time in prep school showed more passion for his jump-shot and partying than studying. We experience his college years under the admitted influence of Marxism, and into Harvard Law and as the President of the Law Review-- which would launch his political career with substantial hype in The New York Times. Obama offers insights into the dynamics of U.S. partisan politics and international diplomacy up until the time he allegedly captures Osama bin Laden.

In a life filled with racial tension, and a haunting self-doubt of her abilities, Michelle Obama emerged as one of the most iconic women in recent history. Establishing herself as a powerful advocate for the female sex and improved nutrition and exercise. Michelle invites readers to join her in chronicling her story. We experience her childhood on the South Side of Chicago, a shy girl self-confined to her room after school to play with dolls until age 10, to her years as an executive balancing the demands of work and being a mother, to her time spent in the 132-room White House where she broke security protocol to sneak out to see the rainbow White House colors to celebrate gay marriage in all 50 states. She describes her triumphs and her disappointments, both private and public--like inappropriately placing her hand on the Queen of England. or saying that she was proud of America--for the first time. Becoming is the personal story of an unlikely rise to the White House by a woman of color that also sends up a few puzzling red flags and glosses over or omits a few key facts.

WARNING!: This is a Best Seller Summary and Analysis of BLACKOUT by Candace Owens. It is not the original book, nor intended to replace it. If you are a Democrat, don't read this book because you will learn many characteristics about your party that...

Summary of Eat to Beat Disease by Dr. William Li
by SpeedReader Summaries

Your Action-Steps Summary of Eat to Beat Disease by Dr. William Li Inside, you’ll find:An introduction to the book and its author, Dr. William LiTime-saving chapter summariesA big picture recap of the book’s main principlesDiscussion and...

Audio Study Guide for the U.S. Citizenship and Naturalization Test
by Mike Swedenberg

Summary of 12 Rules for Life: An Antidote to Chaos by Jordan B. Peterson + Summary of Crushing It by Gary Vaynerchuk 2-in-1 Boxset Bundle
by SpeedyReads

Wanna Read But Not Enough Time?Then, grab a SpeedyReads of Summary of 12 Rules for Life: An Antidote to Chaos by Jordan B. Peterson and Summary of Crushing It by Gary Vaynerchuk Now!This is a 2-in-1 Boxset Bundle!Download And Start Reading Now - Eve...

Summary of 12 Rules for Life: An Antidote to Chaos by Jordan B. Peterson + Summary of Homo Deus by Yuval Noah Harari 2-in-1 Boxset Bundle
by SpeedyReads

Wanna Read But Not Enough Time?Then, grab a SpeedyReads of Summary of 12 Rules for Life: An Antidote to Chaos by Jordan B. Peterson and Summary of Homo Deus by Yuval Noah Harari Now!This is a 2-in-1 Audiobook Boxset Bundle!Download And Start Reading...