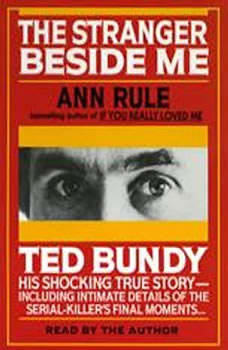 Ann Rule was working on the biggest story of her career, tracking the trail of victims left by a brutal serial-killer. Little did this future bestselling author know that the savage slayer she was hunting was the young man she counted among her closest friends. Everyone's picture of a natural winner, Ted Bundy was a bright, charming, and handsome man with a promising future as an attorney. But on January 24, 1989 Bundy was executed for the murders of three young women - and had confessed to taking the lives of at least thirty-five more women from coast to coast. Ann Rule, who kept in constant contact with Bundy throughout the investigation, tells his story as no other person can, capturing the essence of his magnetic power, unholy compulsion and demonic double life. Available for the first time on audio, this shocking true story is an unforgettable listening experience. In an emotional reading, Rule tells us about Ted Bundy - the man she thought she really knew...the stranger beside her.

Worth More Dead
by Ann Rule

Why would a man kill his lover's husband and then his wife, the woman who fought successfully to have him paroled from prison? Why would he risk arrest by kidnapping the child of another woman who adored him?Because they were…Worth More DeadA ...

Stranger Beside Me
by Ann Rule

Ann Rule was working on the biggest story of her career, tracking the trail of victims left by a brutal serial-killer. Little did this future bestselling author know that the savage slayer she was hunting was the young man she counted among her clos...

Serial Killer on Ward C In Northampton, Massachusetts, at the Veterans Affairs Medical Center, Kristen Gilbert was known as a hardworking, dedicated nurse—so why were her patients dying? So many emergencies and sudden deaths occurred while Kri...

But I Trusted You
by Ann Rule

The most fatal mistake?Trust. It's the foundation of any enduring relationship between friends, lovers, spouses, and families. But when trust is placed in those who are not what they seem, the results can be deadly. Ann Rule, who famously chronicled...

Midnight in the Garden of Good and Evil
by John Berendt

Shots rang out in Savannah's grandest mansion in the misty,early morning hours of May 2, 1981.  Was it murder or self-defense?  For nearly a decade, the shooting and its aftermath reverberated throughout this hauntingly beautiful...

The Good Nurse
by Charles Graeber

After his December 2003 arrest, registered nurse Charlie Cullen was quickly dubbed "The Angel of Death" by the media. But Cullen was no mercy killer, nor was he a simple monster. He was a favorite son, husband, beloved father, best friend, and cele...

He has hunted some of the most notorious and sadistic criminals of our time: TheTrailside Killer in San Francisco, the Atlanta Child murderer. He has contronted,interviewed and researched dozens of serial killers and assassins -- includingCharles Ma...

Don't Look Behind You
by Ann Rule

I'll be watching you.Walking home on a dark night, you hear footsteps coming up behind you. As they get closer, your heart pounds harder. Who is closing in with dangerous intent—a total stranger? Or someone you know and trust? The answer is as...

The Monster of Florence
by Douglas Preston

BY THE AUTHOR OF THE #1 NEW YORK TIMES BESTSELLER THE LOST CITY OF THE MONKEY GOD In the nonfiction tradition of John Berendt's Midnight in the Garden of Good and Evil and Erik Larson's The Devil in the White City, Douglas Preston presents a...

Ann Rae Stackhouse was born in Lowell, MI in 1931. Her mother taught school, specializing in developmentally disabled children, and her father was a coach. Ann was in law enforcement in her young adult years, as was many in her family. She received various degrees from different colleges and universities, including studying creative writing, criminology, and psychology at University of Washington.

Ann's marriage, and eventual divorce changed her last name to Rule, which she keeps as her author name. Her extensive education and experience as a police woman gave her the perfect credentials to become regarded by many as the foremost true crime writer in America, setting the standards for the genre. For example, while she was volunteering at a suicide hotline center in Seattle in 1971, she met a work study student by the name of Ted Bundy, not realizing until a few years later that it was the same Bundy responsible for a series of murders. To her, he was kind, solicitous, and empathetic. She wrote her first book about him, considered one of the definitive biographies of Bundy.......The Stranger Beside Me (written under her own name, rather than the previously used pen name).

Rule has been a full-time crime writer since 1969, and has published 33 books and 1400 articles, mostly on criminal cases.

Today, she teaches seminars to law enforcement groups, a certified instructor in many subjects such as: Serial Murder, Sadistic Sociopaths, Women Who Kill, and High Profile Offenders. She has consulted with the FBI at their headquarters in Quantico, VA tracking a system to help identify and trap serial killers. She testimonies twice before the Senate Judiciary Sub-committee on victim's rights and the danger of serial killers.

Simon and Schuster currently have Rule under contract. Eight of her books have been made into TV movies, and more are in the works. Ann is in active support groups for victims of violent crimes and their families, in programs to help battered and abused women, and support group.