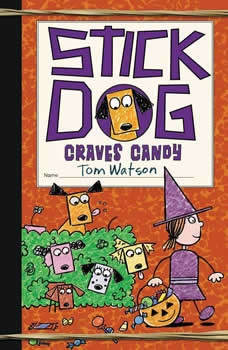 Perfect for fans of Big Nate, Diary of a Wimpy Kid, and the previous Stick Dog books, Tom Watson’s hilarious series continues with Stick Dog Craves Candy—a fun Halloween adventure!Stick Dog and the gang are on their usual hunt for food, but there is something unusual going on. Little humans are dressed up as creepy witches and spooky ghosts, all carrying big orange buckets!Their search leads them to something unexpected and delicious and sweet—candy! Once they get a taste, they will stop at nothing to get more. The gang will have to avoid terrifying witches and even escape a creepy haunted house! Will Stick Dog's smarts, courage, and patience be enough to lead his buddies to the best treats ever?Witches, and ghosts, and goblins...and Stick Dog and friends! Oh my!