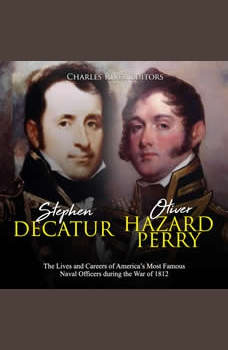 Stephen Decatur and Oliver Hazard Perry: The Lives and Careers of America’s Most Famous Naval Officers during the War of 1812

Americans had few things to celebrate during the Barbary Wars or the War of 1812, but one of them was the growing prestige of the U.S. Navy, and among those who were instrumental in its development, few were as influential as Stephen Decatur Jr. Decatur had an impact on nearly every war America fought in between the 1780s until his death in 1820, and his stardom ensured that he was a fixture among Washington, D.C.’s elite in his own lifetime. As with John Paul Jones during the American Revolution, Decatur’s activities helped instantly associate his name with the fledgling country’s success at sea.

One of the only major victories the Americans won throughout the War of 1812 came at the Battle of Lake Erie in September 1813, and that action made Oliver Hazard Perry, a veteran of the Barbary Wars and commander of the USS Lawrence, a legend whose name has endured for over 200 years. Perry was so instrumental in the victory that British historian C.S. Forester noted “it was as fortunate for the Americans that the Lawrence still possessed a boat that would float, as it was that Perry was not hit." As one of the biggest naval battles of the war, the results meant that America maintained control of Lake Erie, an important location from which they could recover Detroit and be better positioned to confront the British and Shawnee leader Tecumseh’s confederacy. For his part, Perry would forever be remembered as the “Hero of Lake Erie,” even as he and compatriot Captain Jesse Elliot would feud over their respective actions during the battle for the rest of Perry’s life.

Perry received a Congressional Gold Medal and the Thanks of Congress for compelling the surrender of the entire British squadron, the first time that had ever happened, but he wouldn’t have much time to enjoy it. He fought in the Second Barbary War in 1815 but died of yellow fever while on a mission in Venezuela in 1819.