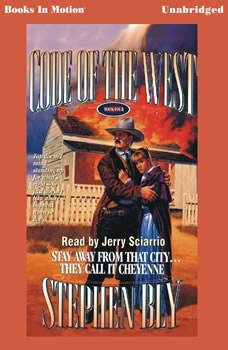 STAY AWAY FROM THAT CITY...THEY CALL IT CHEYENNE

Series: Code of the West #4

Married life for Tap and Pepper isn't turning out quite the way they planned. The ranch is gone and they've moved to Cheyenne where Tap finds himself a job as acting marshal in a town that has little regard for the law. And it's not a pretty sight! He soo