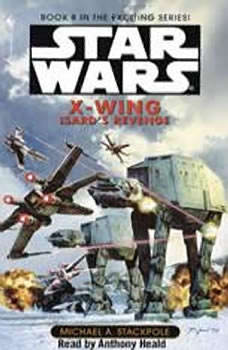 Sleek, swift and deadly, the famed X-Wing fighters have earned their reputation as the Rebel Alliance's ultimate strike force the hard way--first in battle, the last line of defense.  Now they must make a deal with the devil herself--an enemy whose ultimate goal is their total annihilation.

It's the kind of mission only Wedge Antilles and the Rogue Squadron would dare to undertake.  Against impossible odds they will stage a daring raid into an enemy stronghold--only to be rescued from certain destruction by an unexpected ally.

Ysanne Isard, the ruthless Imperial commander, has appeared on the scene seemingly from out of nowhere.  Now she proposes a most unusual alliance, offering to help Wedge rescue his captured comrades from Imperial Warlord Admiral Krennel's sadistic prison camp.

But her offer is not without a price.  Wedge must lead Rogue Squadron in Isard's deadly struggle against an enemy made in her own image.  It's an offer Wedge would love to refuse, for Isard is certain to betray them.  But how can they leave their comrades at Krennel's mercy?  The answer is: they can't--even if it means being caught between Krennel's ruthlessness and Isard's treachery.

The Paradise Snare: Star Wars (The Han Solo Trilogy)
by A. C. Crispin

Here is the first book in the blockbuster trilogy that chronicles the never-before-told story of the young Han Solo. Set before the Star Wars movie adventures, these books chronicle the coming-of-age of the galaxy's most famous con man, smuggler, an...

He's the most feared and successful bounty hunter in the galaxy. He is Boba Fett, and even the most hardened criminals tremble at his name. Now he faces the deadliest challenge of his infamous career--an all-out war against his most dangerous enemie...

Star Wars: The Thrawn Trilogy: Heir to the Empire
by Timothy Zahn

It’s five years after the Rebel Alliance destroyed the Death Star, defeated Darth Vader and the Emperor, and drove the remnants of the old Imperial Starfleet to a distant corner of the galaxy. Princess Leia and Han Solo are married and expecti...