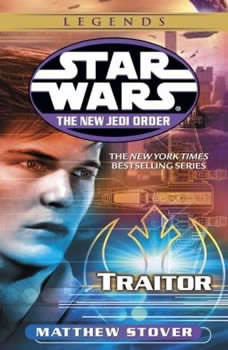 From the depths of catastrophe, a glimmer of hope

After the capture of Coruscant, the mighty heart of the New Republic, a stunned galaxy fears that nothing can stop the Yuuzhan Vong. Still, that crushing defeat produces one small miracle: Jacen Solo is alive. Yet he can scarcely imagine himself in stranger circumstances.

The young Jedi Knight is in the care of Vergere, a fascinating creature of mystery and power, her intentions hard to fathom, her cruelties rarely concealed. But this master of inscrutable arts has much to teach the young Jedi . . . for she holds the key to a new way to experience the Force, to take it to another level—dangerous, dazzling, perhaps deadly.

In the wrong hands, the tremendous energies of the Force can be devastating. And there are others watching Jacen’s process closely, waiting patiently for the moment when he will be ready for their own dire purposes. Now, all is in shadows. Yet whatever happens, whether Jacen’s newfound mastery unleashes light or darkness, he will never be the same Jedi again. . . .