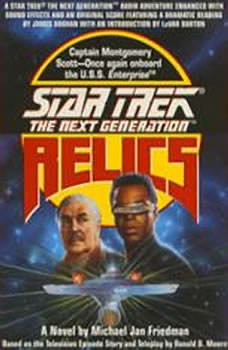 Star Trek: The Next Generation: Relics

The U.S.S. EnterpriseTM discovers the wreckage of a starship upon the monstrous surface of a Dyson sphere, an artificially-constructed habitat built around a star; and preserved in a weak transporter pattern is Starfleet engineering legend Montgomery "Scotty" Scott. Mr. Scott boards the Enterprise to find himself lost in a world that he barely recognizes, a world that has passed him by. But soon the Enterprise finds itself trapped within the Dyson sphere and pulled into the star, and Scotty must work with Lt. Geordi La Forge to rescue the Enterprise.