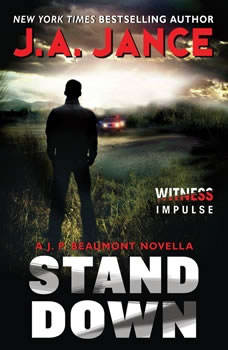 Stand Down: A J.P. Beaumont Novella

Life has shifted for J. P. Beaumont. After a tragic accident that devastated—and ultimately disbanded—his Special Homicide Investigation Team, he accepts that he has left homicide detection behind at this point, but he has a lot of unanticipated free time on his hands. He's keeping busy with renovations on the new house that he and his wife Mel Soames, the newly appointed Chief of Police in Bellingham, Washington, have bought. But new fixtures and paint palettes can occupy only so much of Beau's daily life, and Mel is encouraging him to return to where he is needed: investigating crimes.In the meantime, she is struggling to gain control of her new situation, cast into a department where some are welcoming—and some are not. It's been a few months, and the tension in the police department is rising, but Beau realizes Mel has to tackle things in her own way, so he refrains from advising. But when Beau shows up one afternoon to survey the construction at their new house and finds Mel's car there but no sign of her, his investigative instincts kick in. Suddenly he's back in the game—except this time, his heart is on the line as well as his professional dignity.

The Old Blue Line
by J. A. Jance

Butch Dixon has been taken for a ride …Not a jump in the car, see the sights kind of ride. He's been taken for everything he has. He's lost his house, his restaurant business, his savings, his car, his best friend, his faith—all to his...

Edge of Evil
by J. A. Jance

The end of her high-profile broadcasting career came too soon for TV journalist Alison Reynolds—bounced off the air by executives who wanted a "younger face." With a divorce from her cheating husband of ten years also pending, there is nothin...