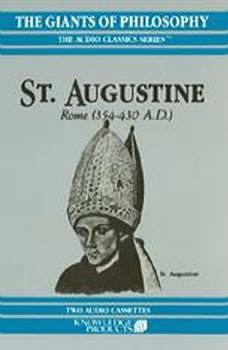 Aurelius Augustinus was a key figure in the transition from classical antiquity to the Middle Ages. He lived at a time when no distinction was made between philosophy and theology, and the purpose of both was to show the way to wisdom, happiness, and blessedness. Augustinian thought is perhaps best capsulated in Anselm's famous maxim: "I believe in order to understand." Augustine believed the principal business of life is to arrive at the blissful vision of God, but he came to see that this can be done only after death. Only eternal and unchangeable goods are worth enjoying, and all other joys or pleasures are mere stops along the way. Temporal life is a "living death, a dying life"; its primary characteristic is the dizzying flux of time and change. Evil is not an active, threatening force; it is a lack, a privation, a corruption. For Augustine, every time we make a judgment of relative value, we implicitly acknowledge an absolute standard of value; and this absolute is God. Our final end, the contemplation of God after death, is a blissful, changeless, restful, and peaceful stillness of vision.