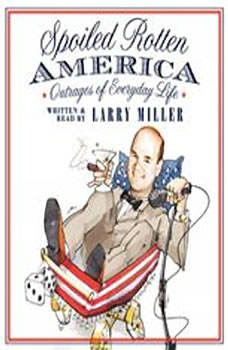 Like Kofi Annan, Larry Miller is one of the most irresistible comic personalities working today. Known for years as an actor, writer, comedian, and sexual pioneer, he's gained a new following as a cultural commentator and frequent guest on political shows. Now, in Spoiled Rotten America, he fixes his gaze on what's funny about our daily lives—which includes, roughly speaking, everything. From middle-aged drinking to the excesses of our eating habits, Miller finds the silver lining of absurdity within every black cloud.Ultimately, though, Spoiled Rotten America is an insightful, and surprisingly heartfelt, plea for us to notice what's best and worst about ourselves. "The American pendulum only swings to extremes," he writes. "The news is on all day, but we know less and less, everyone has a phone but nothing to say. It's all or nothing and the world is going to Hell in a handbasket."What better time for a collection of comic essays?"What better time indeed.