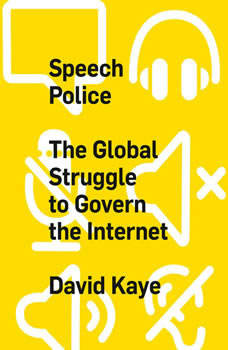 Speech Police: The Global Struggle to Govern the Internet

Who polices speech online? Who is in charge?

"There is an epidemic sweeping the world," the Nigerian Minister of Information, Lai Mohammed, said. "It is the epidemic of fake news. Mixed with hate speech, it is a disaster waiting to happen." Some argue that the disaster has already happened. But is the solution as simple as ridding social media of disinformation and hate speech? Who should decide whether content should be removed from platforms, or which users should be kicked off? Should governments set the rules and force the American behemoths--Facebook, YouTube and Twitter--to follow? Or should the companies be permitted to moderate their space as they see fit? David Kaye, one of the world's leading voices on human rights in the digital age, deals with these issues on a daily basis as the United Nations' Special Rapporteur on freedom of opinion and expression. Speech Police brings us behind the scenes, from Facebook's "mini-legislative" meetings to the European Commission's closed-door negotiations, and introduces journalists, activists, and content moderators who take down a virtual flood of photos, videos and text every day. He tells the story of people around the world who are trying to get it right while facing an almost impossible task--with massive consequences for users and the public.

The Bottomless Cloud
by Thomas Koulopoulos

The Bottomless Cloud challenges the scarcity-driven mindset by taking a hard look at how industrial age business models are failing us by regarding data as a commodity and a cost that needs to be constrained, rather than a near infinite resource tha...

Monopolies and Tech Giants: The Insights You Need from Harvard Business Review will provide you with today's most essential thinking on corporate inequality, help you understand what it will mean for your organization, and inspire your company to su...

How to Install Kodi on Amazon Fire TV & Fire Stick DevicesWhen jailbreaking and installing Kodi on Fire TV devices you will get access to any content that you want such as TV Shows, Music, and Movies.Heres what you'll get:All About Kodi on Firestick...

"Knowledge is a treasure, but practice is the key to it" ~Lao TzuTo gain the fullest use of a computer, a person should make it a goal of learning all they can about their operating system. Windows 7 is a system that offers a potpourri of features t...

"What the Internet did for communications, Blockchain will do for trusted transactions".- Ginni Rometty, IBM CEOCryptocurrency and it's disruptive architecture, Blockchain, is now making the biggest revolution in the Finance sector for the last 100 ...

The Year in Tech, 2021
by Harvard Business Review

From the latest applications of AI to blockchain-enabled business models to 5G networks, the most important technological innovations of the past year are reshaping the present and future of business. What should you and your company be doing now to...