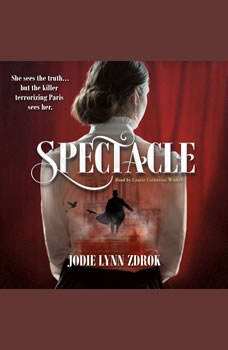 Spectacle is a YA murder mystery from debut author Jodie Lynn Zdrok in which a young reporter must use her supernatural visions to help track down a killer targeting the young women of Paris.Paris, 1887. Sixteen-year-old Nathalie Baudin writes the daily morgue column for Le Petit Journal. Her job is to summarize each day’s new arrivals, a task she finds both fascinating and routine. That is, until the day she has a vision of the newest body, a young woman, being murdered—from the perspective of the murderer himself.When the body of another woman is retrieved from the Seine days later, Paris begins to buzz with rumors that this victim may not be the last. Nathalie's search for answers sends her down a long, twisty road involving her mentally ill aunt, a brilliant but deluded scientist, and eventually into the Parisian Catacombs. As the killer continues to haunt the streets of Paris, it becomes clear that Nathalie's strange new ability may make her the only one who can discover the killer’s identity--and she'll have to do it before she becomes a target herself