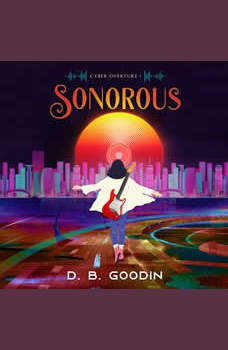 Sonorous: A Cyberpunk Journey into the Fight for Musical Identity

Why did we let the machines assimilate our musical culture?

In a world where machines create most music, Alice Parsons is fed up, but what can she do? When she loses the only job she’d ever liked, she stumbles on a club that caters only to humans. She’s intrigued, and decides to inquire within. She discovers a group of rebels who’s values align with her own. The president of MuseFam, the largest supplier of AI generated music takes an interest in the group of rebels and wants them stopped.

Someone from Alice’s past reenters her life, suddenly her world is turned upside down, and she’s forced to come to terms with her situation.Will Alice’s past ruin her future? Will she be able to reintroduce human produced music to a society brainwashed with AI generated rubbish? Find out in this Cyberpunk saga.

If you like The Diamond Age, Ready Player One, or Blade Runner, then you will love Sonorous.

Pick up Sonorous to discover this electrifying new series today!

Ensemble
by D. B. Goodin

Operating an all-human club is great… unless it is outlawed.After the AI Copyright Act is repealed, megacorporations such as MuseFam increase the production of AI-generated music more than ever before. Robot production kicks into top gear, an...

Chromatic
by D. B. Goodin

Would risk your freedom to save another?When Alice lands a new job as a talent agent that caters to all-human Rock & Roll bands, her world is turned upside down when a mysterious man captures one of her friends and leaves a sinister calling card. As...

The Making of Cyber Teen Project
by D. B. Goodin

Go behind the scenes for the inspiration and development of the Cyber Teen Project.Contains deleted scenes, character profiles, games, and unreleased content.Dive into the future of Milford with original previously unreleased Cyberpunk themed s...