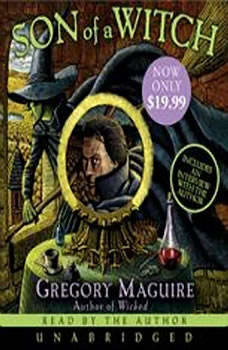 Son of a Witch

The Wicked Years continue in Gregory Maguire’s Son of a Witch—the heroic saga of the hapless yet determined young man who may or may not be the offspring of the fabled Wicked Witch of the West. A New York Times bestseller like its predecessor, the remarkable Wicked, Son of a Witch follows the boy Liir on his dark odyssey across an ingeniously re-imagined and nearly unrecognizable Land of Oz—a journey that will take him deep into the bowels of the Emerald City, lately abandoned by the Wizard, and into the jaws of dragons. At once a grim fairy tale and an uplifting adventure, Son of a Witch is a true wonder.

This has got to be one of the most creative writing ideas and one of the most creatively written stories I've ever seen. I only read it because my sister bullied me into it. I thought what most people must think: Wizard of Oz yeah whatever I know that story not interested... but 10 pages in and I couldn't put it down. It's NOT the same story, AT ALL. It's amazing. It's a terrific book and I highly recommend it to anyone! The first book too :

I tried very hard to get into this story but had a difficult time getting over the author's terrible reading style. He enunciates every word, which is usually a good thing, but in this case comes across in a very elementary school style. I was only able to listen to 2 out of the 20 CDs before I sent the book back. If I am to finish this book, I will go ahead and read it myself.