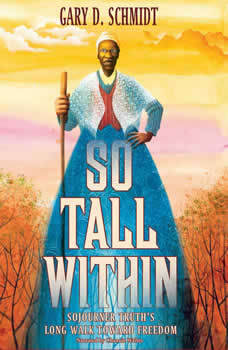 So Tall Within: Sojourner Truth's Long Walk Toward Freedom

Sojourner Truth was born into slavery but possessed a mind and a vision that knew no bounds. So Tall Within traces her life from her painful childhood through her remarkable emancipation to her incredible leadership in the movement for rights for both women and African Americans. Her story is told with lyricism and pathos by Gary D. Schmidt, one of the most celebrated writers for children in the twenty-first century, and brought to life by award winning and fine artist Daniel Minter. This combination of talent is just right for introducing this legendary figure to a new generation of children.