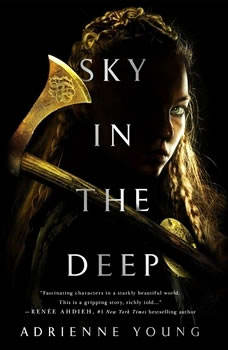 Sky in the Deep

"Fearless in its exploration of family, forgiveness, loyalty, and love, Sky in the Deep is fierce, vivid, and violently beautiful. This book will wage a war with your heart as brutal and as bold as the battles inked in its pages." - Stephanie Garber, New York Times Bestselling author of CaravalIn her highly-anticipated debut audiobook, Adrienne Young brings to life a lush, vivid world that will enchant listeners everywhere. Sky in the Deep is mythic in scope and speaks straight to the heart. Raised to be a warrior, seventeen-year-old Eelyn fights alongside her Aska clansmen in an ancient, rivalry against the Riki clan. Her life is brutal but simple: train to fight and fight to survive. Until the day she sees the impossible on the battlefield—her brother, fighting with the enemy—the brother she watched die five years ago.Eelyn loses her focus and is captured. Now, she must survive the winter in the mountains with the Riki, in a village where every neighbor is an enemy, every battle scar possibly one she delivered. But when the Riki village is raided by a ruthless clan settling in the valley, Eelyn is even more desperate to get back to her beloved family.She is given no choice but to trust Fiske, her brother’s friend. They must do the impossible: unite the clans to fight together, or risk being slaughtered one by one. Driven by a love for her clan and her growing love for Fiske, Eelyn must confront her own definition of loyalty and family to find a way to forgive her brother while daring to put her faith in the people she’s spent her life hating.More praise for Sky in the Deep:"Young’s often poetic writing forms a stark juxtaposition with her vivid descriptions of battle and bloodshed, creating a clear picture of the brutality of war." — Publishers Weekly"Young’s staccato prose matches her fierce fighters, but the raw emotions and rapid pacing belie a well-honed voice and taut narrative. A rousing saga and moving coming-of-age tale, perfect for those who appreciate the wild and the wildlings, strong female protagonists, and cinematic battles." — Kirkus