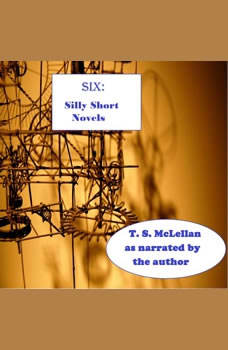 Seven separate stories, each one a mash-up of literary, theatrical, television or motion picture classics, sometimes spanning the genres to humorous effect. Parodied here are the works of Cervantes and Steinbeck, Hemingway, Fleming, Haley and several others, and tackling the spy thriller, the Western, and the cop show.

It's late at night. Your parents are asleep. You've just found the most exquisite two-dimensional Japanese .jpg known to man; unfortunately for you, the source of it seems to turn up empty.Needless to say, I know why you're here. Thank me later, aft...

The One Road
by Jack Byrne

A dark comedy, a buddy story, and a road trip all in one. The opening story in this collection follows Vinny, Kevin, and a mourning family from Liverpool on a journey to Wales. What should be a simple trip turns into something much darker. A cross b...

Are you a wage slave?As children we can’t help but dream of all of the amazing things that we will accomplish. Then life happens. We get a job, we get a house, and we get into debt. We settle.We trade away our youth, for security in old age. W...

The 1960s. A world before modern building materials. A world where man only dreamed of space exploration. A world in which everything was made from paper. The intrepid crew of the Good Ship Corrugated set off into the black in search of excitemen...

Blood on the Salad
by John Isaac Jones

Story about a group of kitchen employees in a 1950s Alabama hotel and how they prepared the salads for the state’s annual businessman’s banquet. Not for the squeamish! Be forewarned:after reading this yarn, you may never again eat a sala...