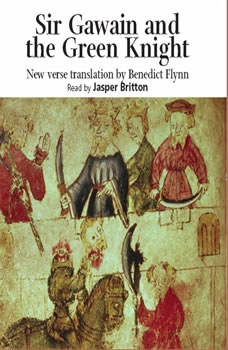 Sir Gawain and the Green Knight

A mysterious knight all in green arrives at King Arthur’s court and issues a bizarre challenge. Gawain answers the knight – but at what cost? This new translation keeps all the poetic power of the original’s extraordinary alliteration. In doing so it brings the saga vividly to life, and in a manner that demands to be heard. One of the greatest stories of English literature from any period, Sir Gawain and the Green Knight is a magical medieval combination of the epic and the uncanny. A new verse translation by Benedict Flynn.

Three key stories from the mists of Irish legend retold by Benedict Flynn, with atmospheric music and sound effects. Enter a mysterious world where the line between the fantastical and the real is blurred mortals and immortals live strange entwined ...

The General Prologue & The Physician’s Tale
by Geoffrey Chaucer

The Canterbury Tales are widely read and studied. The Middle English in which they were first written differs sufficiently from modern English, in vocabulary and usage, that most of us require a contemporary translation. On this recording the &lsquo...

The Inferno of Dante
by Dante Aligheri

Dramatic, intense, and gripping, The Inferno of Dante is an astonishing masterpiece that no listener can afford to miss. Robert Pinsky, the distinguished American poet, preserves the burning clarity and universal relevance of this 13th century liter...

King Arthur & The Knights of the Round Table
by Benedict Flynn

These stories are about how, many years ago, Arthur the once and future King of England, set out to save his country from the troubles that plagued it, aided by the brave knights of his Round Table, and the most famous sword in the world, Excalibur;...

The Pardoners Tale
by Geoffrey Chaucer

These three tales from The Canterbury Tales are read in the original Middle English by Richard Bebb under the direction of Britain’s foremost Chaucer scholar, Derek Brewer. This was Bebb’s last recording – he died shortly afte...

A Life of Dante
by Benedict Flynn

Dante’s vision The Divine Comedy has profoundly affected every generation since it first appeared in the early fourteenth century. Here is a brief account of his life, compiled from various sources (including his first biographer, Boccaccio) b...

The Knyghte’s Tale
by Geoffrey Chaucer

The Knight’s Tale of medieval wars and chivalry is the first tale told to the pilgrims as they set out to Canterbury. It concerns Theseus, returning from fighting at Thebes, two brother knights Palamon and Arcite, imprisoned but yearning for t...

The Tale of Troy
by Benedict Flynn

There was once a time, nearly four thousand years ago, when the tall towers of a city called Troy reached gleaming into the sky; when its proud king fought against an invading army in a desperate siege. The Tale of Troy was so important to the ancie...

The Adventures of Odysseus
by Benedict Flynn

The Adventures of Odysseus is the story of what happened after the Trojan War when Odysseus, the most cunning of all the Greek heroes, left Troy and made his way back to his wife Penelope and his son Telemachus. It was first told by a poet named Hom...