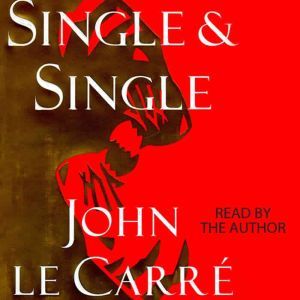 A lawyer from the London finance house of Single &amp; Single is shot dead on a Turkish hillside by people with whom he thought he was in business. A children's magician is asked by his bank to explain the unsolicited arrival of more than five million pounds sterling in his young daughter's modest trust. A freighter bound for Liverpool is boarded by Russian coast guards in the Black Sea. The celebrated London merchant venturer "Tiger" Single disappears into thin air.In Single &amp; Single the writer who both epitomizes and transcends the novel of espionage opens with a haunting set piece, then establishes a sequence of events whose connections are mysterious, complex, and compelling. This is a story of corrupt liaisons between criminal elements in the new Russian states and the world of legitimate finance in the West. Le Carré's finest novel in years, it is also an intimate portrait of two families: one Russian, the other English; one trading illicit goods, the other laundering the profits; one betrayed by a son-in-law, the other betrayed, and redeemed, by a son.This is territory le Carré knows better than anyone. Masterful and prescient, he is writing at the top of his creative powers, and Oliver Single, the central protagonist, is one of his most fascinating characters.

Fiction imitating real life seems to be an apt mantra for British born author, David John Moore Cornwell, or his pen name, John le Carre'. He had a very "un-normal" childhood, having been abandoned by his mother when he was five years old, and his father made and lost fortunes several times by using tricks and schemes, and even landed in jail for insurance fraud. le Carre' was reunited with the mother he never knew when he was 21. Unbeknownst to him, he developed his fascination with secret lives from his observation of his father's unsavory lifestyle.

le Carre' studied and received a degree in modern languages after a few "bumps in the road" along the way. He joined the Intelligence Corps of the British Army stationed in Allied-occupied Austria, serving as a German language interrogator, then worked covertly for the British Secret Service, M-15 as a spy to detect Soviet agents. He taught at Eton College while he was an M-15 officer. He ran agents, conducted interrogations, tapped telephones, and supervised break-ins. He was encouraged to write by other authors, writing his first novel, Call for the Dead in 1961. In 1960, he had transferred to M-16, the foreign intelligence service. His cover for that position was Secretary of the British Embassy at Bonn, and later Hamburg. It was at that time that he wrote, A Murder of Quality, and The Spy Who Came in from the Cold. He assumed his pen name when he wrote, since officers were forbidden to publish in their own names.

le Carre's novels include: The Looking Glass, Tinker Tailor Soldier Spy, The Spy Who Came in from the Cold, Smiley's People, The Little Drummer Girl, The Night Manager, The Tailor of Panama, The Constant Gardner, A Most Wanted Man, and Our Kind of Traitor. All of the John le Carre' novels were adapted for film or television.