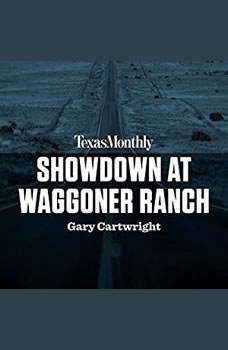 In partnership with Texas Monthly, Gary Cartwright's "Showdown at Waggoner Ranch" is now available as an audio download, where the length and timeliness of a podcast meets the high-quality production of a full-length audio program.

"Showdown at Waggoner Ranch" is the saga of Texas's second largest ranch and its shambles of an inheritance left by W.T. Waggoner to his descendants. It is a history of a sliver of Texas's elite, how they made their money and how they, often scandalously, spent their time. Simultaneously, it is a nod to the cowboy lifestyle that stands at risk should the feud of the Waggoner inheritance actually put the fate of the ranch at risk.

With a rollicking cast of characters -- Native American chiefs, Teddy Rooosevelt, an eight-time divorcee, the best and richest of East Coast society -- Gary Cartwright offers a rich exploration into the creation of an empire and its imminent downfall.