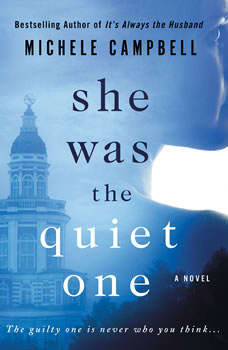 She Was the Quiet One

"[A] mystery with teeth — and nails." — New York Times Book ReviewFrom the author of It’s Always the Husband comes a riveting new suspense audiobook about privilege, power, and what happens when we let ambition take control. For Rose Enright, enrolling in a prestigious New England boarding school is the opportunity of a lifetime. But for Rose’s vulnerable twin sister Bel, Odell Academy is a place of temptation and danger. When Bel falls in with a crowd of wild rich kids who pressure her into hazing Rose, the sisters’ relationship is shattered. Rose turns to her dorm mother, Sarah Donovan, for advice. But Bel turns to Sarah’s husband Heath, a charismatic and ambitious teacher. Is Heath trying to help Bel or take advantage of her? In a world of privilege, seduction, and manipulation, only one sister will live to tell the truth. In an audiobook full of twists, turns, and dark secrets, Michele Campbell once again proves her skill at crafting intricately spun and completely compelling plots.Praise for She Was the Quiet One:"Campbell’s skillful characterization and her shocking final twist make this follow-up to It’s Always the Husband well worthwhile. Readers who enjoyed Simone St. James’ boarding-school mystery, The Broken Girls, should give this a try." —Booklist“A creepy thriller that has notes of Mean Girls and The Secret History.” — Refinery29“Filled with dark secrets, this novel will bring about plots you never saw coming.” — Buzzfeed

A Discovery at Vonville
by L.C. Warman

After a contentious debate, a secluded family holds an open house to finally sell their estate. But when one among them suddenly dies, the tragedy threatens to unravel the secrets that bind them together.***Deborah, Patricia, and Elizabeth have live...

The Other Sister
by Sarah Zettel

Two sisters. One murder plan.An intense psychological thriller full of family secrets, perfect for readers of The Woman in the Window and Watch Me Disappear. Everyone thought reckless, troubled Geraldine Monroe was the bad sister-especially when sh...