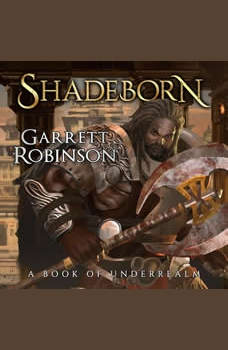 Shadeborn: A Book of Underrealm

DESOLATE UPON THE ROAD, LOREN MUST FEND FOR HERSELFThe saga of the Nightblade continues across the nine kingdoms.

Loren is listless in the wind. Though the Shades have been revealed, the cost of that knowledge seems too heavy to bear. And once again Xain is clutched by the tremors of magestone sickness, giving her the excuse she needs to simply...not go on.

But now that the Shades have been found, they will not let Loren rest. If the Mystics learn what she knows, all the Shades' dark schemes could be thrown into disarray. Northwood will be the first town to burn under their icy fury, but as they hunt for Loren on the road to Feldemar, it will not be the last.

"People should check out Garrett, he is an excellent vlogger and writer." — Hank Green

"Robinson is a skilled author, particularly when creating interesting female characters. He has oodles of talent and is destined for great things." — Shen Hart, TheReviewHart.com

Book Four of the Nightblade EpicJOIN THOUSANDS OF READERS IN AN EPIC ADVENTURE.
Recommended