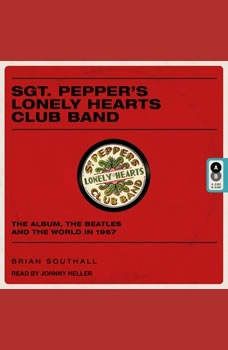 Sgt. Pepper's Lonely Hearts Club Band: The Album, the Beatles, and the World in 1967

A carefully crafted and collectible volume celebrates the fiftieth anniversary of a legendary and groundbreaking Beatles album. Expert Brian Southall's unique edition recounts the story behind the music and the cultural climate of 1967 when Sgt. Pepper's Lonely Heart Club Band debuted. The "A-side" of this coolly curated title is all about the Beatles, the music on the album, the recording process, how the disc was received at the time, and how it has been acknowledged as one of the greatest albums ever recorded. The "B-side" looks at the state of the world in 1967, from the Summer of Love to anti-war protests to the launch of Rolling Stone magazine to Jimi Hendrix's first U.K. tour as a solo artist—and so much, much more.

In 1969 Michael Lydon, a founding editor of Rolling Stone and a leading member of rock writing's first generation, got a dream assignment: to cover the Rolling Stones' hopscotch tour across America that ended at Altamont. His long, intimate piece o...

As early as 1954, a new style of musica combination of country and rhythm and blueswas unfolding. To the parents of teenagers, it was worrisome, perhaps even evil. In this collection of original recordings from interviews and press conferences, arti...