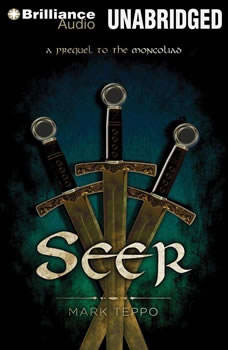 Seer: A Prequel to the Mongoliad

When a merchant appears at the Catalonian chapter house of the Shield-Brethren, seeking to hire guards for his caravan, young Andreas is suspicious. Knights with his martial prowess are above protecting mere cargo wagons. Yet Andreas’s wanderlust outweighs his concern, and soon the group is headed to the merchant’s mountain village — and into great danger. As the caravan approaches, a woman suffering from terrifying visions feverishly paints her latest revelation — in her own blood. The image horrifies her fellow villagers, who fear an imminent attack, or worse, the return of the brutal Inquisition. But when Andreas deciphers the painting’s true meaning, it may forever impact his wandering ways, his unspoken fears, and his very future with the Shield-Brethren. Following Sinner and Dreamer, this third and final prequel to The Mongoliad reveals the painful truth that sometimes seeing what is to come is far worse than not knowing.