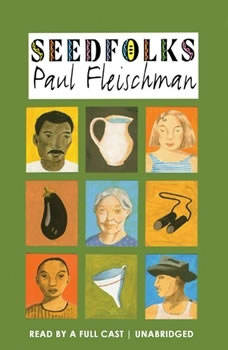 A vacant lot, rat-infested, and filled with garbage, looked like no place for a garden. Especially to a neighborhood of strangers where no one seems to care. Until one day, a young girl clears a small space and digs into the hard-packed soil to plant her precious bean seeds. Suddenly, the soil holds promise: to Curtis, who believes he can win back Lateesha's heart with a harvest of tomatoes; to Virgil's dad, who sees a fortune to be made from growing lettuce; and even to Maricela, sixteen and pregnant, wishing she were dead. Thirteen very different voices-old, young, Haitian, Hispanic, tough, haunted, and hopeful tell one amazing story about a garden that transforms a neighborhood. An Audible.com Bestseller.

The Gospel According to Larry
by Janet Tashjian

Josh Swensen is not your average 17-year-old. At the age of two, he was figuring out algebraic equations with colored magnetic numbers. He is a prodigy who only wants to make the world a better place. Josh’s wish comes true when his virtual al...