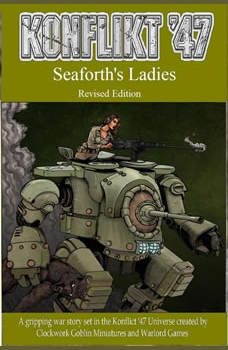 It’s the Spring of 1947 and Canada, as part of the British Commonwealth, has been at war with the German Third Reich for seven and a half years. A lot has changed in that time, not the least of which a whole bunch of technological changes brought about by the Rifts that were opened by the America’s atomic bombs. The Canadians added their own changes to the world when they started to allowed women to crew some of this tech on the front lines. Now Sergeant Alexandra ‘Alex’ Mackenzie and the crew of the walker Winnie face their greatest challenge so far: breaking in a new British Lieutenant as their commanding officer. Oh, and they also have to help their battalion, the Seaforth Highlanders of Canada, to break through a German defensive line. But that’s just what they agreed to do when they volunteered to crew the Allies walking tanks.

Set in the universe of Clock Work Goblins Miniatures’ Konflikt ’47, Seaforth’s Ladies brings to life the rich and gritty background of this alternative World War II. This revised edition contains more world background, making it easier for those not familiar with the Konfikt '47 universe to get into the story.