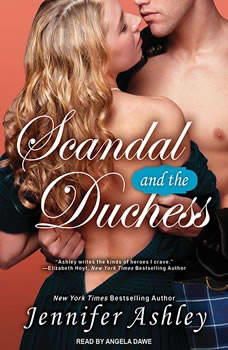 Scandal and the Duchess

Scandal follows Rose Barclay, young widow of the Duke of Southdown, wherever she goes. It's never her fault, but newspapers love to write about the simple girl from Scotland and the much older duke who died suddenly on their honeymoon. And now there is even more talk as the legitimacy of the marriage is being contested by the duke's son and heir. Steven McBride is a decorated soldier—and a notorious gambler and womanizer. The last thing he wants is marriage, but due to a series of unfortunate events, his and Rose's names are linked in the papers, threatening the lovely lady with ruin. To save the day, Steven suggests that they claim to be engaged. But as desire boils between them, Rose and Steven soon learn the difficulties of maintaining their deception, which might not be a lie after all . . .