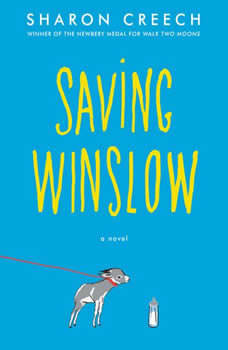 “A winning tale of love.” --Kirkus Reviews (starred review)Perfect for fans of Charlotte’s Web and The One and Only Ivan, Saving Winslow is an uplifting modern classic in the making about a young boy who befriends an ailing newborn donkey and nurses him back to health, from New York Times bestseller and Newbery Medal winner Sharon Creech.Louie doesn't have the best luck when it comes to nurturing small creatures. So when his father brings home a sickly newborn mini donkey, he's determined to save him. He names him Winslow. Taking care of him helps Louie feel closer to his brother, Gus, who is far, far away in the army.Everyone worries that Winslow won't survive, especially Louie’s quirky new friend, Nora, who has experienced loss of her own. But as Louie's bond with Winslow grows, surprising and life-altering events prove that this fragile donkey is stronger than anyone could have imagined.Written in the spirit of Creech favorites Moo and Love That Dog, this standout tale about love and friendship and letting go will tug at the heartstrings.