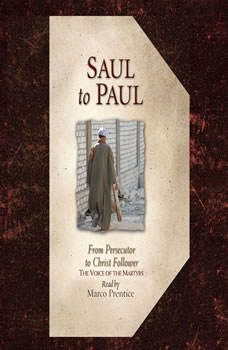 Saul to Paul: From Persecutor to Christ Follower

No conversion story in the Bible is more expansive than that of the apostle Paul. God chose Paul for a unique purpose, and he has chosen many other "Sauls" to become "Pauls" throughout the history of Christianity. The seven men in this book tried to destroy the bride of Christ but ultimately succumbed to the power of the Holy Spirit.These modern-day "Sauls to Pauls" illuminate the struggle of the persecuted church and show that our sovereign God can incline even the most hardened heart toward his own. As the Bible clearly illustrates, when a "Saul" becomes a "Paul" and engages as an active witness, the kingdom of God grows exponentially.Your prayer life for our persecuted family will be transformed as you read the testimonies of men who choose to bless rather than curse those who wish them harm. The stories will also challenge you to consider your attitude toward your enemies, confronting you with the question, "How would God's kingdom be affected if they became completely committed to Christ and his Great Commission?"

Into the Den of Infidels
by Marco Prentice

To counteract Christian evangelism, Paul set out to expose the false teachings and corruption in the Torah and the Bible. Instead, this Muslim zealot found the true faith in Christ, who changed him, “He did what the God of Mohammed was unable ...