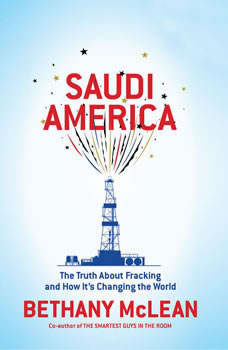 Saudi America: The Truth About Fracking and How It's Changing the World

The technology of fracking in shale rock -- particularly in the Permian Basin in Texas -- has transformed America into the world's top producer of both oil and natural gas. The U.S. is expected to be "energy independent" and a "net exporter" in less than a decade, a move that will upend global politics, destabilize Saudi Arabia, crush Russia's chokehold over Europe, and finally bolster American power again.

Investigative journalist and bestselling author Bethany McLean digs deep into the cycles of boom and bust that has plagued the American oil industry for the past decade, from the financial wizardry and mysterious death of fracking pioneer Aubrey McClendon, to the speculators who are betting on America's ascendance and the collapse of OPEC in the great game of geopolitics. McLean finds that fracking is a business built on attracting ever-more gigantic amounts of capital investment, while promises of huge returns have often not borne out. Overeagerness in partaking in a boom can lead to all types of problems and just as she did with the Enron story, in Saudi America McLean points out the reality and the risks of the inflated promises of the fracking boom.

In two earlier books, Hubbert's Peak and Beyond Oil, geologist Kenneth S. Deffeyes laid out his rationale for concluding that world oil production would continue to follow a bell-shaped curve, with the smoothed-out peak somewhere in the middle of th...