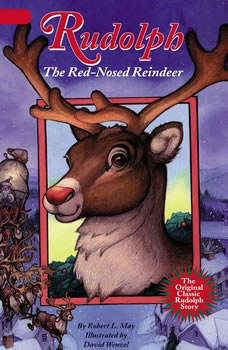 Fans of the greatest reindeer of all will have a double helping of Christmas fun with this collection, which includes the title story plus "Rudolph Shines Again." Near and dear to so many hearts, this is the story, the original story, of Rudolph the Red-Nosed Reindeer, written by Robert L. May in 1939. Rudolph, loveable and generous, humble and good, embodies the spirit of Christmas, and reminds us of the magical possibilities that exist within us all. In the companion story, "Rudolph Shines Again," Rudolph loses his light and is certain he is of no use to Santa now; he decides to go far away, where no one knows how bright his nose used to be. But on his journey, something magical happens. As enchanting as the original story, Robert L. May's uplifting sequel to his classic tale Rudolph the Red-Nosed Reindeer is a joyous celebration of the spirit of Christmas. Also included in the audio is a selection of holiday songs for kids to help you ring in the season: "Jingle Bells," "Up on the Housetop," "Deck the Halls," "Over the River and through the Woods," "We Wish You a Merry Christmas," and "O, Christmas Tree."