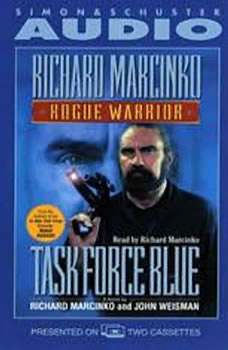 AS A U.S. NAVY SEAL, RICHARD MARCINKO KNEW NO LIMITS, AS THE ROGUE WARRIOR, HE OBEYS NO RULES!No one knows SpecWar -- deep-cover commando operations conducted with absolute secrecy and total ruthlessness by the world's most deadly counterterrorist units -- better than Richard Marcinko. Now the Rogue Warrior returns in a raw, authentic novel of terrorism striking at the heart of the American government and the military...Once again, the Rogue Warrior and his team of SEALs have been called into action. Mission: storm a hijacked 727 sitting on a Key West airstrip and rescue the Secretary of the Navy. In a flash of high-tech explosives and automatic gunfire, a hostage is killed -- and Marcinko will be the one to pay. Facing a court martial and permanent removal from the Navy, the Rogue Warrior has one more call to answer, from an ultra-secret operative inside the Defense Intelligence Agency (DIA).America's worst nightmare has become a reality. The hijackers' roots run deep in U.S. soil: Americans willing to kill Americans to create a government in their own fanatical image. The Pentagon's security has been breached: the arsenal of democracy raided. The DIA needs someone to eradicate the terrorist infrastructure, circumventing the Navy and the FBI. They need Marcinko and his elite SEAL contingent, Task Force Blue -- and, faithful to his ultimate Commandment of SpecWar, there are no rules -- Marcinko will win at all costs.