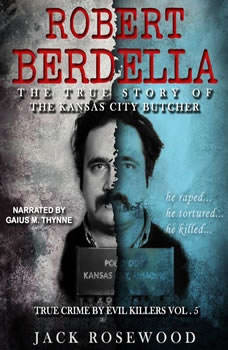 Robert Berdella: The True Story of The Kansas City Butcher

When Chris Bryson was discovered nude and severely beaten stumbling down Charlotte Street in Kansas City in 1988, Police had no idea they were about to discover the den of one of the most sadistic American serial killers in recent history. This is the true historical story of Robert Berdella, nicknamed by the media the Kansas City Butcher, who from between 1984 and 1988 brutally raped, tortured and ultimately dismembered 6 young male prostitutes in his unassuming home on a quiet street in Kansas City. Based on the actual 720 page detailed confession provided by Berdella to investigators, it represents one of the most gruesome true crime stories of all time and is unique in the fact that it details each grizzly murder as told by the killer himself. From how he captured each man, to the terrifying methods he used in his torture chamber, to ultimately how he disposed of their corpses - rarely has there ever been a case where a convicted serial killer confessed to police in his own words his crimes in such disturbing detail. Horrific, shocking and rarely equaled in the realms of sadistic torture – Berdella was a sexually driven lust killer and one of the most sadistic sex criminals ever captured. Not for the faint of heart, this is the tale of Robert “Bob“ Berdella, the worst serial killer in Kansas City History and for those that are fans of historical serial killers, is a true must read.