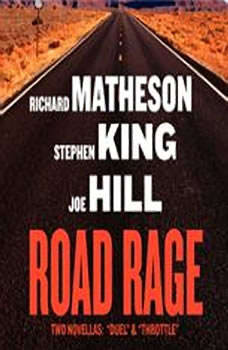 Road Rage unites Richard Matheson's classic Duel and the contemporary work it inspired—two power-packed short stories by three of the genre's most acclaimed authors. Duel, an unforgettable tale about a driver menaced by a semi truck, was the source for Stephen Spielberg's acclaimed first film of the same name. Throttle, by Stephen King and Joe Hill, is a duel of a different kind, pitting a faceless trucker against a tribe of motorcycle outlaws, in the simmering Nevada desert. Their battle is fought out on twenty miles of the most lonely road in the country, a place where the only thing worse than not knowing what you're up against, is slowing down . . .

Born in 1972 to authors Tabitha (nee Spruce) and Stephen King, Joseph Hillstrom King grew up in the state of Maine along with his younger brother, (also a writer) Owen King.

At age 9, Joe appeared in the 1982 film Creepshow, which was written by his famous father. In 1997 he chose to use an abbreviated form of his given name (a reference to executed labor leader Joe Hill, for whom he was named), out of a desire to succeed based solely on his own merits rather than as the son of Stephen King, one of the world's best-selling and most-recognized living novelists. Hill's debut, Heart-Shaped Box, won the Bram Stoker Award for Best First Novel. His second, Horns, was made into a film Freakfest starring Daniel Radcliffe. His other novels include NOS4A2, and his #1 New York Times Best-Seller, The Fireman.

Hill currently lives in New Hampshire with a corgi named McMurtry after a certain beloved writer of cowboy tales.