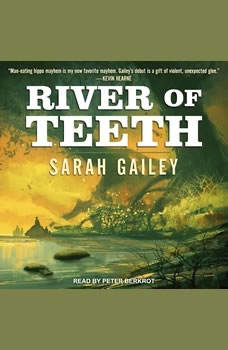 In the early twentieth century, the United States government concocted a plan to import hippopotamuses into the marshlands of Louisiana to be bred and slaughtered as an alternative meat source. This is true. Other true things about hippos: they are savage, they are fast, and their jaws can snap a man in two. This was a terrible plan. Contained within this volume is an 1890s America that might have been: a bayou overrun by feral hippos and mercenary hippo wranglers from around the globe. It is the story of Winslow Houndstooth and his crew. It is the story of their fortunes. It is the story of his revenge.

Joan of Arc was a15th century French heroine. She was born a peasant girl in eastern France who grew up to lead the French army to several important victories during the Hundred Years' War. She was captured by the Burgundians, sold to the English, t...

If The South Had Won The Civil War
by MacKinlay Kantor

Just a touch here and a tweak there . . . MacKinlay Kantor, Pulitzer Prize-winning author, master storyteller, shows us how the South could have won the Civil War, how two small shifts in history (as we know it) in the summer of 1863 could have tu...