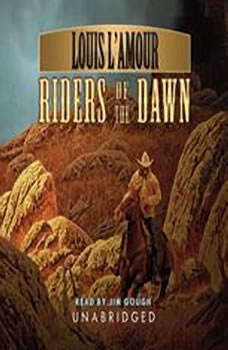 Riders of the Dawn

Early in Louis LAmours career, he wrote a number of novellength stories for pulp western magazines. I lived with my characters so closely that their lives were still as much a part of me as I was of them long after the issues in which they appeared went out of print, he said. I wanted to tell the reader more about my people and why they did what they did. So he revised and expanded these magazine works to be published again as fulllength novels. Here is one of these early creations that have long been a source of great speculation and curiosity among his fans. In Riders of the Dawn, a young gunslinger is changed for the better by a meeting with a beautiful woman. A classic rangewar western, this novel features that powerful, romantic, strangely compelling vision of the American West for which LAmours fiction is known. In the authors words: It was a land where nothing was small, nothing was simple. Everything, the lives of men and the stories they told, ran to extremes.

Trap of Gold Weatherton finds the dream of a lifetime, a vein richer in gold than he ever cared to imagine. He knew he had more than he needed, but he almost lost his senses - and his life - as the fever began to take control of him. Hattan's Castle...