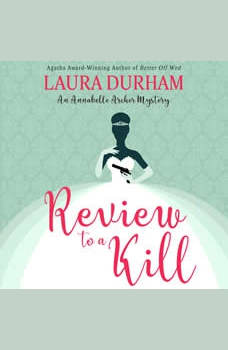 Review to a Kill

A bride with a talent for panning people online. A list of victims longer than a receiving line. Was one of them angry enough to murder her?

For wedding planner Annabelle Archer, bridezillas come with the territory. But the latest difficult diva is also known for poisonous online reviews. When she and her groom are shot, the police don’t need to look any further than the victims of the bride’s one star reviews for potential suspects. Unfortunately, Annabelle and her colleagues are at the top of that list and rising fast as other suspects are murdered.

Review To A Kill is the third book in the Annabelle Archer Wedding Planner cozy mystery series. If you like charming characters, fast-paced comedy, and behind-the-scenes glimpses into the wild world of weddings, then you’ll love the latest installment in Laura Durham’s Agatha award-winning wedding planner mystery series.