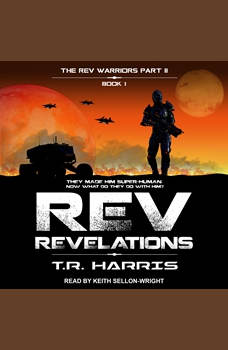 REVS are the super-soldiers of the future, chemically-enhanced Marines who have begun to produce the Rev drug naturally in their bodies. Now there are supermen and -women walking among us,and you wouldn't even know it . . . After the defeat of the evil Antaere in the first REV Series, Zac and his super warriors carry on, as the hammer used against a myriad of obstinate races. The Union of Affiliated Systems (Earth's new stellar empire) is determined to expand far beyond the Grid, using the REVs as the means of convincing reluctant species to join. After all, its for their own good. Membership in the UAS will benefit all. So what if a little blood has to be spilled in the meantime. Zac didn't want command of the REV force in the first place, and now he's put in an impossible situation with too few troops and other resources to complete his mission. But he's a super-REV in command of an army of REVs. Surely there is no one who can stand against the enhanced Marines of the near future. Are the REVs here to replace the Human race with a new, more powerful version of man? Many think so, and that's why Zac is meeting so much resistance. A reckoning is coming, between the Humans of old and the REVS.