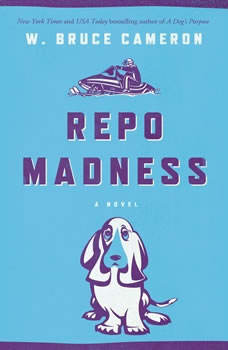 Ruddy McCann is back in Repo Madness--the laugh-out-loud, thrilling adventure from bestselling author W. Bruce Cameron!Ruddy McCann, former college football star, now Kalkaska, Michigan repo man, is finally getting his life back on track. He has a beautiful fiance, Katie Lottner, a somewhat stable job stealing cars, and a lazy, lovable basset hound.With his job suddenly in jeopardy, his fiance wanting a break, and a new court-ordered psychiatrist insisting he take his medication or violate the terms of his probation, Ruddy finds himself missing the one thing he thought he would be happy to be rid of--the voice of Alan Lottner, dead realtor and Ruddy's future father-in-law. When a woman tells Ruddy that the tragedy that defines his life may, in fact, be a lie, Ruddy starts to investigate the disappearances of women in the area and soon discovers that his own redemption may be within reach. Alan's voice returns, and Ruddy and Alan work together to bring down a corrupt banker, win back Katie's love, and stop a serial killer before he can strike again."Great atmosphere, a believable premise, and a nuanced, empathetic Everyman hero." - Kirkus Reviews