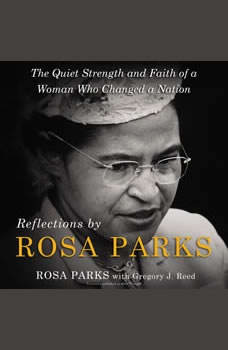 Reflections by Rosa Parks: The Quiet Strength and Faith of a Woman Who Changed a Nation

<p>On December 1, 1955, Rosa Parks refused to move to the back of a city bus in Montgomery, Alabama. She was not trying to start a movement. She was simply tired of the social injustice. Yet, her simple act of courage started a chain of events that forever shaped the landscape of American race relations.</p><p>Now, decades after her quiet defiance inspired the modern civil rights movement, Mrs. Parks&rsquo;s own words tell of her courageous life, her passion for freedom and equality, and her strong faith. Reflections by Rosa Parks celebrates the principles and convictions that guided her through a remarkable life. It is a printed record of her legacy&mdash;her lasting message to a world still struggling to live in harmony.</p><p>Including historic and beautiful pictures, this collection of Rosa Parks&rsquo;s reflections includes topics like dealing with fear, facing injustice, developing character and determination, faith in God, and her hope for the future.</p><p>&ldquo;I want to be remembered as a person who stood up to injustice,&rdquo; writes Rosa Parks, &ldquo;who wanted a better world for young people.&rdquo; With Mrs. Parks&rsquo;s words of wisdom, humility, and compassion, this book will inspire people of all races to carry on her great legacy.</p>

In the early seventeenth century, Captain John Smith led a company of English settlers to found the colony of Jamestown in Virginia. Here is Smith's own account of his adventures there and his relationship with the beautiful Indian princess, Pocahon...