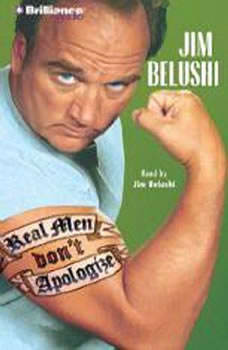 Jim Belushi is a national celebrity who has starred in numerous movies as well as the current hit TV show airing on ABC, According to Jim. His “guy’s guy” take on things has led to a huge following among both men and women who can’t get enough of Jim and his irrepressible take on life. Now he’s sharing his unique perspective with a hilarious new book about dating, marriage, and sex that is sure to hit home with every red-blooded American male, and the women who love them. Any guy will relate to Belushi’s advice from the school of hard knocks, such as the Big Toe Theory, about how women encroach on a man’s territory, and how to avoid the Pearl Harbor Phenomenon, when women attack without provocation. Belushi has strong opinions on how real men should act, and he relates his ideas with the trademark irreverent humor that has made him famous. Including sex definitions; a quiz to see if you’re really ready to get married; tips on how to pick up women; and Jim’s list of Critical Things About Men that Can’t Be Found in Woody Allen Movies - this is the book that every guy needs in these turbulent, trying times.